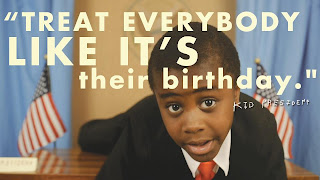 Liberal religion needs working-class realism.  Despite the black church's reputation for other-worldliness, it has met the needs of the present.  Child care, food and shelter, funerary matters, the cause of civil rights, and voter registration are all concerns to which the black church has responded...The situation of blacks in America has always served to make political freedom a pressing issue...

However, the primary function of the church is as a "temple," not as a "forum."  Whatever transpires needs to happen in the context of a worshiping community.  It is there that people bear witness to and celebrate their roots in Universal life.  It is in this time and space set apart that people recognize an intimacy with the world that pervades life at all times.  Here the elements of spirituality in religion draw us beyond the intellect to the felt connection with a personal God.  It was in this relationship that the slave found dignity, for it cut across all distinctions and touched one's essential humanness...[This] experience of connectedness is the essential spiritual element in religion.  This connection and consequent human dignity are inherent in life, and this inherent dignity...bestows forgiveness on the vulnerable individual who inevitably fails in an achievement-oriented society...[and] it destroys the walls of isolation around those who feel that dignity can only rest upon personal achievement.

--from Black Pioneers in a White Denomination by Mark D. Morrison-Reed

So many of us in liberal religions are looking, some might say desperately looking (and none moreso than those of us coming out of liberal seminaries), for what it is that can hope to help us reignite the spark of our congregations.  For decades, the conservative churches and the fundamentalists seemed to have the answer:  Greater personal responsibility and greater personal blame that came from a greater sense that God had imposed a certain order on humanity which, due to those religions' unwillingness to read modern changes into that order, as well as that order's own inherently self-contradictory nature, made people simultaneously blessed and sinful (Martin Luther called them "simul iustus et peccator"), self-celebratory and self-condemning, and the collection baskets ranneth over.  That has all changed.  The fundamentalists don't have the secret.  There may simply not be a secret but a constantly moving target that alights here and then there.  The late nineteenth and early to mid twentieth centuries seemed to be liberal religion's turn, and then it was the conservative's.

Maybe what we're all missing is a sense of the best of both worlds.  Morrison-Reed makes much (not without cause) at places in his book of the tendency of Unitarian Universalism to privilege intellectual argument over what he refers to here as an experience of connection that in more conservative circles "is marked by an ecstatic event."  It is certainly true, as the old joke goes, that if the road in the afterlife is forked with a sign pointing "This way to Heaven; this way to arguing about Heaven," all the UUs will be tramping the latter way.  But it's also true, as Nas puts it, that "life is good, no matter what, life is good."


What does each of us need to know?  That we are valued and that our lives have significance.  We struggle to acquire that same sense of somebodiness that the slaves desired. But they knew that activity could not achieve this feeling.  It had to be a gift.  Yet as a gift, it undercuts activity, revealing that the source of value is Being itself...[It] is on this level that one senses or knows the ultimate connectedness of existence.  To truly value oneself is to value that which undergirds life...[and] this shatters all illusions of isolation.  One begins to experience the suffering of others as if it were one's own, and to act to alleviate it.

This experience of others can talk us off the bridge, even when we put ourselves there, loves art, cooks and enjoys good food, educates, puts others at ease, tells one another "salaam," and reminds us everything's good, everything's fine.


We listen so deeply to the stories of others that we begin to know their pain.  To open ourselves to that which we know will be painful is an act of strength.  And having done this we can act with...commitment and...conviction...

To quote the great and sainted Lou Reed, "Life's good, but not fair at all."  It's the unfairness that one day convinces us there's no reason to even bother getting out of bed, and the next day forces us up because something has to be done.

How do we reignite the fire under congregations?  Nobody knows.  Perhaps we are looking for something that doesn't exist.  Perhaps we're looking for something the best of liberal (and conservative) religion already has in abundance:  The willingness to listen to others and share their pain.  Not to wring our hands and identify our guilt in their pain because that will always be there--there will never be an end to the involvement of those of us who are privileged, however you want to define privilege, in the pain of others.  But we can acknowledge our role in their stories.  Mia McKenziei, in a recent blogpost I have really enjoyed (inasmuch as someone can enjoy having his blindness pointed out), echoes Morrison-Reed's definition and reminds us we can make some things better.


For a dozen years we have watched as the mainstream media has ignored the deaths of so many brown children, day after year after decade. I mean, they were ignoring the deaths of Black children all over the world, including here, way before that, but we didn’t have to see them ignoring it so blatantly every morning and afternoon and evening and night on TV (that 24-hour news cycle is a bitch; they have time for everything except our stories). Also, before the internet, and specifically before bloggers, the killing of black children by police officers had much less chance of even being known about outside of the community in which it happened. So, you know, you could at least feign ignorance. But now we know how often these things are happening...Why don’t our children get to be children? Why don’t they ever get to be innocent?...The only way to stop this is for you to stop ignoring our lives and our deaths and our stories. For you to put the names and faces of those Black and brown children in your news and on your Facebook pages. It is not enough for you to say, when confronted, that you care. You need to act like it.

Perhaps the secret is this:  Treat everyone as if he or she is your child, your parent, or your sibling.  It should be simple but of course as with so much else it seems not to be.  Making it happen is reason enough to get anyone out of bed.
Posted by bobby sneakers at 8:38 PM