the art of squatting 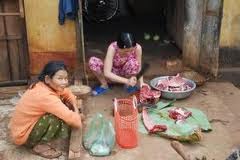 Although I read this last year, this section has stayed with me since then and I catch myself consciously thinking of its wisdom while I'm squatting somewhere, waiting. I've come no longer to use waiting time to check my FaceBook or email or even, as I used to do, to use the opportunity to catch up on some reading (although I do continue to carry a thick book in my car for such opportunities). Instead, I squat, watching, waiting, thinking a little. Being.


My workers come from many places in Mexico and live in small towns scattered throughout the valley. Del Rey, where many of them stay, is the nearest town to my farm. The estimated population is about 1,500, but during the summer harvest the town swells to twice that size. The workers live in rented rooms, small cramped boardinghouses, or hidden bungalows in converted garages and toolsheds.

I visit one of these apartments. The workers live in a small outbuildings behind my foreman's house. Some of the men are standing, others are crouching in a familiar squat.

My grandmother squatted that way, peasants I saw in South America squatted that way, old folks in rural Japanese villages did the same. It is a common-folk way of resting and a fine observation point from which to watch the world. It's the squat I use when I'm waiting, not for anything in particular but the waiting and resting that's part of farming.

Squatting evens out physical differences. Tall people and short ones become closer in height when squatting. You share with others a common point of view. Once you squat you have to think twice about getting up; you become conscious of choices and decisions. Squatting is a mark of country folk who have worked the land and whose legs are in excellent condition. You can't squat well if you are overweight, if your legs are used to sitting in chairs, or if you are lazy. I wonder if we've lost the art of squatting. In our fast-paced world today, we're too busy or think we're too good to squat.

--From Epitaph for a Peach: Four Seasons on My Family Farm by David Mas Masumoto
Posted by bobby sneakers at 9:46 AM