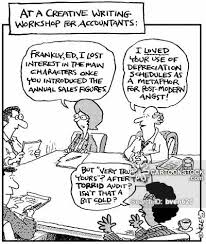 Most writers have accepted, not without questions, but with few alternatives, the basic format of the fiction workshop, and the collective standards that are apt to prevail there, emphasizing, in the case of fiction, the short story...The writing seminar itself has developed a specific, venerated, and almost inviolable format...A work will be read by the class, and perhaps a few passages read aloud by its writer, who is then forced to be quiet while others talk about it. Experienced participants will begin by saying something nice about the writing, something they liked, something that works. This is positive and also has the virtue of softening the next phase, the criticism. Fellow seminarians will try to confine their remarks to technique and not judgment of the writer's character or ability--nothing to suggest "you must be a horrible person to have written such a disgusting piece..." If you have to criticize, instead say, "the clumsiness of that passage may distract from you interesting theme of universal brotherly love," or something else genial.

--From "They'll Make You a Writer!: [A Review of] The Program Era: Postwar Fiction and the Rise of Creative Writing by Mark McGurl" by Diane Johnson in the November 7, 2013, issue of New York Review of Books

As a recipient of what, elsewhere in her essay, Johnson calls "the ubiquitous and valued MFA," and a member of many workshops, I can vouch for the veracity of the description above. And as someone who's taught a couple undergraduate creative writing courses myself--which were, above all else, a lot of fun--I can also admit to the supposition of the first sentence: I tried to break the format in my first class but found it nearly impossible to do so. So like the proverbial American lit professor who includes the execrable Sister Carrie in his syllabus because it was part of his studies, I taught exactly the way I was taught, and in some instances in much the same way.

But this isn't to dis the teaching of creative writing in contemporary American schools or the subject of studying creative techniques because, the truth is, I had a lot of fun taking workshops. I loved the arguing, the overlapping elements of narrative and plot and authorial intent (my own favorite, and true, explanation for why it doesn't matter what the author intended: "I won't have you to explain this to me when I'm reading it alone."), the all-night drives to other towns to take part in joint readings, the drinking and bullshit sessions with visiting writers. The acting as if writing really mattered. And it was also true what I told my students: if focusing on writing interested them, then by all means go study it because they would have a focus and concentration and comment on their art that they will never have otherwise in their lives.

And while it's true that, as McGurl points out, the holy triumvirate of finding your voice, writing what you know, and showing rather than telling, tends to produce cookie-cutter small-magazine voices talking about their own special hyphenate problems (in my experience, we often slapped down genre writing in class because "no one," meaning "no one in this class," "reads it," denying the prime real estate devoted in any sized bookstore to the sales of exactly that kind of writing about what no one, whether classified as science fiction, mystery, fantasy, action or romance, has ever experienced), Johnson touches on a truth here when she quotes Elif Batuman in The London Review of Books: "We have to stop being ashamed that 'literary writing is inherently elitist and impractical. It doesn't directly cure disease, combat injustice, or make enough money, usually, to support philanthropic aims,' except in the case of Dave Eggars. But we can still proudly practice it."

This, by the way, remains my favorite workshop-related piece in any media:
Posted by bobby sneakers at 4:02 PM