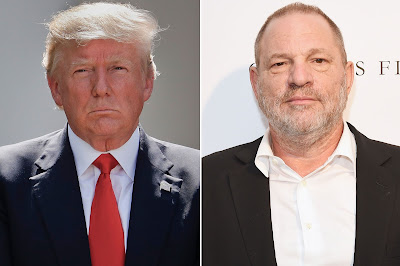 I want to add my voice to the #MeToo movement (or potential movement), but not in the way of my women friends and my wife and a few men friends. No, I can't identify as someone who has been taken advantage of, but as someone on the other side.

My "Me Too" comrades are Harvey Weinstein and Donald Trump.

It's a hard thing for someone to admit, that he has been an asshole, pressing someone to have sex. But it's imperative in the Beloved Community that we own our mistakes and own them without pretense. I can't fathom the notion of Weinstein's "That was the culture" excuse, because really, even in the midst of the worst of the excesses of the last fifty years, if we were listening we could hear women telling us it wasn't the role they wanted in the revolution. In that culture there was a resistant strain of American machismo that allowed men to mouth changes for society but still left room for the worst forms of cocksmanship.

And I'll admit, I took part in that assumption of male power too. Why not, it often got me laid. Such acts are a giving in to the frailty of our egos and the humbling admission that what we think we deserve we really don't. I didn't have the influence of a Weinstein or Trump, but I was still a man and in this world that's often power enough. There are big holes in my memory, whole years, but I remember two instances when I pushed beyond acceptable flirtation to flat-out hands-on-the-body coercion, and while neither woman actually said "No"--both in fact ignored my clumsy pawing--their body language certainly did, and I plunged on as if it didn't matter. It didn't work in either case, by which I mean I didn't get laid, so there's that.

But I can't apologize personally to either of them because, no surprise, after we parted the next morning we never saw one another again. So if you're out there, I'm sorry I was an asshole. What happened wasn't your fault, but mine.

And this is why I can demand of a Weinstein and a Trump that their excuses, whether held up as excesses of the culture or of locker room talk, are limp and mealy-mouthed. Because there was a third instance. For whatever reason, although I hope it was a growing awareness what other people meant to me, this time I agonized over what I'd done, knowing even as I put hands on her it was wrong, and when I saw her again I apologized in public. In front of friends and strangers I owned responsibility and asked her forgiveness. She gave it and never contacted me again. I did the right thing.

It has to be done. Men who do this, women who do this, anyone who tries and succeeds or tries and fails to take advantage of someone through coercion or intimidation or reliance on being in a more powerful position, are responsible to make amends and apologize to the person they've tried it with. Understand, doing so isn't brave or cleansing. It is embarrassing and humbling, but it should be because what we've done is crossed the line that divides the playfulness of wooing and the seriousness of pressure. To do so, we know, is wrong, and as bad as we might feel in confessing it and asking forgiveness, we should feel worse for having done the act in the first place.

Posted by bobby sneakers at 5:51 AM