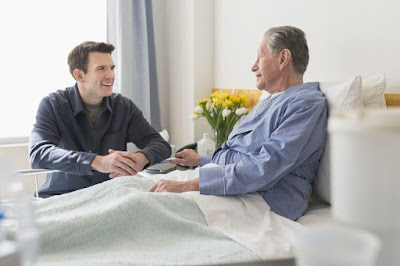 Today I saw Dad at 10 this morning but he was asleep and stayed that way for the 20 or so minutes I remained with him. I left a note for him, saying I'd be back at 1:30. When I returned, he was awake and being wheeled to a bingo game. We sat in the little soda shop at the end of the hallway. In contrast to how he was yesterday, he wasn't sure either who I was, and as I realized a little later, who he was. He did ask whether I was his son, and I told him yes. He asked more questions about his brothers (I had told him yesterday his next eldest brother had died last year, which his daughter, my cousin, had told him shortly after the event but didn't think he'd understood), and finally asked, Are you Harold? I said, No, you're Harold. I'm Bobby, your son.

We were offered sherbet and he ate about half the cupful. It seemed to make a change in him; he had been itching and when I came back with lotion from his room, he called me Bobby and said he was tired and wanted to lie down. I agreed, but said first we should look at the bingo game. We did; he said he'd still like to lie down. On our way to his room, two RNs asked him to walk for a bit with his walker. Dad agreed, reluctantly. He stood with help and used the walker to walk, slowly and with some pain, about 15 or 20 yards down the hallway. I told him I was very proud of him and he said, My legs hurt. So I took him to his room, helped him into bed, and he sank into deep slumber. But before he did he reached out for my hand.
Posted by bobby sneakers at 4:28 PM