Nostalgia in a box 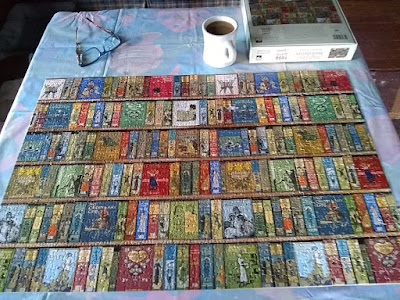 I've been doing jigsaw puzzles lately, sometimes with my mother-in-law who turns out to enjoy them and will stay up until all hours doing them. This is one I'd bought last winter for my wife and I to do on cold nights.

It's difficult to see, but the subject is girls' adventure books of the early 20th century, and what interests me is the depth of nostalgia I found as I was putting it together. I used to read the boys' version of these when I was what we now call a tween. While I can't say I remember them well, I do remember the sense of, if not adventure, then of calm they gave me. I'm certain what both boys and girls series were intended to do was to give growing kids the sense of optimism about their future. If these misfit characters--in the above examples, The Girl Who Lost Things or The Worst Girl in the School; in my memories, Smilin' Jack and Red Ryder and Little Beaver and the Rover Boys, Paladin, even Mickey Mouse--could grow up into some sense of normalcy, defined in the novels a sense of belonging both to society at large and a smaller community of people who looked up to and appreciated the misfit, then I certainly could.

For me, these were eventually supplanted by the Whitman Big Little Books of the late 60s and early 70s, featuring more contemporary characters like Batman or Major Matt Mason or Frankenstein, Jr.

What I remember best about these series was the inclusion of death in them: the killing of a strangely behaving mouse in The Man from U.N.C.L.E., the deaths of some of The Invaders, the deaths by shootout of typical bad guys in Bonanza. These led me to the Doc Savage and The Shadow novels republished in the early 70s and a mainstay of the drugstore book racks. In them, death was a constant, both for the unwary and ultimately for the villain. Someone not paying the right attention or meddling where he didn't belong could become the victim of the machinations of an unscrupulous would-be world conqueror or petty criminal, eventually given his comeuppance by the hero.
Posted by bobby sneakers at 6:11 AM