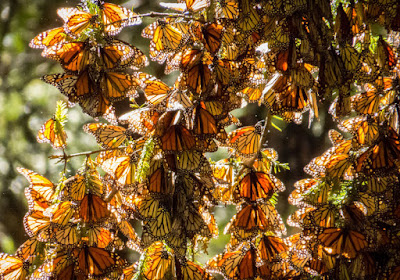 While we fretted over our inability to hold the trump administration to account, and that was indeed a problem, small murders like this were happening elsewhere. And while it is unlikely trump had a hand in it, it smacked too neatly of the rationale behind many of his offenses: Do it because you can get away with it.

URUAPAN, Mexico (Reuters) - Mexican authorities said on Saturday they are investigating the possible murder of a tour guide working at a famous butterfly reserve in the western state of Michoacan, just two days after its former environmental activist was buried.

Raul Hernandez’s body was found in the area in the early hours of Saturday, with different parts beaten, and a head injury possibly caused by a sharp object, the state attorney general said.

Earlier this week, Mexicans in El Rosario mourned the death of activist Homero Gomez, who had fought for a decade to protect the monarch butterflies until his mysterious death. It is unclear whether the two cases are connected.

The sudden disappearance of such a high-profile campaigner had sparked an outcry in Mexico, an increasingly violent country where activists are routinely threatened, harmed or even killed as a result of their work.

Millions of the orange and black insects make a 2,000-mile (3,220-km) journey each year from Canada to winter in central Mexico’s warmer weather. However, they are facing new challenges linked to extreme weather and changing habitat.

Michoacan state is not only home to the country’s largest monarch butterfly reserve, a World Heritage Site, but also rival drug gangs who battle to control smuggling routes through often-arid terrain to the Pacific and the interior of the country.

Posted by bobby sneakers at 6:37 PM