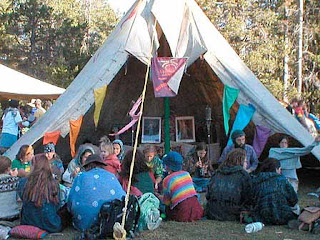 Here's my vision: Unitarian Universalism accepts a future as a tribal congregation and pioneers such a future by basing its identity on that. I envision a temple-tent with the best elements of the CALM tent at Rainbow Gatherings, thick rugs and pillows, incense, chimes, backrubs and massage. Constant music with a spiritual theme: Matisyahu, kd lang, Ray Lynch, Enigma, Sleater-Kinney, Van Morrison.  Books and other literature would be available for borrowing or for reading there.  Someone would be  available in the tent for 24 hours a day, one of two or three ministers whose job is essentially to be a presence.  Each morning, noon, and evening one would conduct a ritual (and these would be different each time, sometimes Christian, sometimes Muslim, sometimes pagan, sometimes Buddhist), and each day there would be a time set aside for guided community dialogue on a question noted on a chalkboard in front of the tent.  This tent would appear at Gatherings, Phish concerts, hobo camps, festivals, occupy events, protests:  anywhere people gather for the purpose of being together. Each person would be given something with the Unitarian Universalist Association's website address on it so they could follow up by visiting and possibly joining a local congregation wherever they settle.

Here's the hard part.  The UUA would have to fund this entirely--the cost of gas and trucking the tent to all these events around the country--as well as paying a stipend to the ministers (and yes, I envision myself as being among them) who would travel with the tent.  This is hard because of two reasons:  we don't have a tradition of missionary activity and so there is little experience to fall back on (on the other hand it means there is no tradition there against which we would need to struggle); and because most congregations, who would see no membership benefit to themselves, would balk at paying to fund this project (many already balk at the idea of paying dues to a national organization whose sole existence, in their eyes, is to collect dues).

Money will always be tight and will always be an issue.  But here's the hardest part:  these people whose experience will have been through Gatherings and such will expect the same type of experience at the local level.  In early Christian, Rasta, and Rainbow Family terms, it's bringing peace to Babylon.  Local congregations will have to learn to accept these folks, fresh off the road and smelly and dirty and sweaty who will come with their dogs and their packs and their ganja and who won't be much interested in UU history as in what UU says about them and the world today, who will come for a meal and may stay a week in the community, living in the park or sleeping on someone's couch, and may take off halfway through the service and head for the freeway with their thumbs out. But the first group will tell another group and they will tell another group.  And they will come, not all at once and not at first.  But they will come.  Their inclusion will force us away from a safe, middle class, suburban church and back into something dangerous in the best way: a fellowship made up of real experiences, few of which will be exactly alike.  I see this as the future of Unitarian Universalism.
Posted by bobby sneakers at 9:13 AM