as we watch Baltimore burn 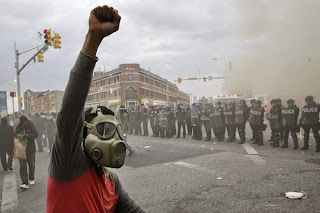 I have been in Baltimore a handful of times, usually on my way somewhere else. I don't think I've spent more than a day there. Most everything I know about the city comes from the novels of Anne Tyler. And the Baltimore she writes about, needless to say, is not the Baltimore of Freddie Gray.

But I'm not an impartial third party either, insofar as I believe we can and should live in a single, worldwide beloved community. My recognition that we don't isn't an admission to the impossibility of the dream, only of our unwillingness to accomplish it. And I know if my city was aflame, I'd certainly want other people caring about it.

I read this essay by Brittney Cooper several days ago and it won't let me go. Try as will to understand the positions of the three black women who are the official faces of Baltimore-Stephanie Rawlings-Blake, it's mayor; General Linda Singh, of the Maryland National Guard; and just-confirmed Attorney General Loretta Lynch-indeed, even to commiserate with them (as she writes, "Not one of these women stands in the place of power she stands in without having battled for it"), she ends up recognizing that "American empire, in its most democratic iteration, is no respecter of persons. Any person willing to do the state's bidding can have a role to play." Cooper locates the sound of the shattering of the peace among the poor and disenfranchised of Baltimore in the sound of the snapping of Freddie Gray' s neck.

That is a horrible metaphor. It is also resolutely true and it's in the truth of it that the horror lies. No one in my community ought to be familiar with that sound.

More troubling has been the response of strangers, and even some people I know, to the riot in Baltimore as if Freddie Gray's death is excused because of the reactions to it. As if Baltimore police were somehow punishing him in advance for the temerity to ignite the CVS with his death.

The simple truth of the situation is that Freddie Gray should not have died. I contend he should not have been arrested in the first place, but even if we grant he had committed a crime, including murder, there is no reason for any person to die in police custody. To quote the character ML from the great Do the Right Thing, a film whose subject, the death of a young black man while being arrested, should not be nearly as contemporary twenty-five years later as it is: "It's as plain as day. They didn't have to kill the boy."

Neither should anyone else. It's as plain as day.
Posted by bobby sneakers at 6:38 PM