would Jesus eat with Josh Duggar? 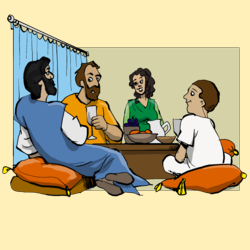 This is not an attempt to investigate or even to come to grips with what Josh Duggar has done. I am not a person who watches reality shows, let alone watches religious reality shows--with the exception of early episodes of Amish Mafia; that shit was dope--and I have no dog in the fight over whether companies should or should not continue to sponsor their show. If they do, it will make absolutely no difference to anyone; if they don't, the show will fade from memory and, again, make absolutely no difference to anyone.

What this is is an attempt to answer a question I came across on the Facebook page of a progressive religious group I belong to. A correspondent wrote that he had been reading 1 Corinthians and quoted from it: "But now I am writing to you that you must not associate with anyone who claims to be a brother or sisterc but is sexually immoral or greedy, an idolater or slanderer, a drunkard or swindler. Do not even eat with such people." Then the poster asked for people's thoughts on the passage in relation to the disclosures about Josh Duggar.

There were many thoughtful and considered responses, most of them very long and complex. But it struck me that, in its refutation of most of the synoptic messages of Jesus, Paul was denying one of the very things that made the synoptic Jesus so different: that is, that he would associate with people who were, exactly as Paul describes, "sexually immoral, or greedy, an idolater or slanderer, [or] a drunkard or swindler." The Jesus we read about in the gospels, whether he is the historical Jesus or a composite of many Jesus-figures or the creation of an especially gifted writer, is unique among the religous people we know of at that time and place, not only allowing these sinners to eat and be with him, but in some cases actively seeking them out, and in the case of the woman caught in adultery putting himself at risk to save her.

Now the traditional theological response in favor of keeping this division, thereby accepting and building upon the Paul command, is that the difference is that the people Jesus associated with had repented of their sinful lives and so were "worthy" of being with him. But that certainly isn't the case with, for instance, the woman caught in adultery: she's had no prior association with Jesus we're told of, and while it's possible in the small world of First Century Jerusalem that the woman knew of Jesus' reputation, he wouldn't have known her. And while it's also true she repents of her past at the end of the tale, that is after Jesus places his own reputaiton, and possibly his life, in question by responding as he does.

So it doesn't matter, in this reading, whether Josh Duggar repents his actions. The Jesus of the gospel stories, if he were asked to sit and eat with him, would have done so. Like Jesus, I also believe in the essential dignity of every person, and while I haven't been asked, I could do no less.
Posted by bobby sneakers at 1:34 PM