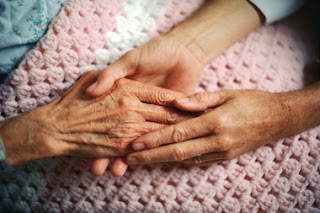 "Ultimately, the human being is designed for dying." --paraphrase of Joan Halifax

I've been wanting to write for weeks about an experience I underwent almost a month ago, but which both circumstances and my inability to articulate it has kept me from examining too closely. This was the death of one of my patients.

A few weeks ago psychiatrist Robin Weiss published an interesting essay in the New York Times called "How Therapists Mourn." It's a good read, well-written, thought through, and full of life and death. He comes to a conclusion that holds as well for chaplains I think as for psychiatric professionals: "Therapists mourn alone."

It's not that we don't want others to share our sadness as that they are probably unable to understand it. I don't mean they don't understand the general sense of loss we feel when a patient dies so much as I think they can't understand the specific loss that patient's death means to us. We've come, through sitting and listening to them, or just sitting quietly with them, to see them in ways that others, who may know them better or more intimately, are unable to.

A month ago I visited a patient whose decline was dramatic after a period of relative energy. Inside a week she had gone from sitting in a wheelchair and actively participating in life to being bed-bound and sleeping nearly all the time. She was unconscious when I arrived so I took her hand while the RN who'd got there before I had went through her paces. She said over her prone body, after her visitor had gone, "I'll be surprised if she lasts the day."

The nurse left about 20 minutes later. We were waiting for one of her daughters to arrive and as I had no other visits that day I said I'd stay with her until she came. But a half hour after the nurse left she became agitated, having difficulty breathing, and opening and closing her eyes without seeing. Her dyspnea, called Chayne-Stokes breathing, is a series of quick, almost urgent, shallow breaths, as is she can't catch it. While I didn't know then what it was called, I was aware she was near her death.

I talked to her, letting her know I was there with her and she wasn't alone. She could be scared, I said, but I was with her and wouldn't be leaving until she was finished. She lay on her back, swallowing great gulps of nothing. I held her hand more tightly and reminded her of my presence.

There was no great shudder. No death rattle. No final words of wisdom. One moment she was breathing, which I could see from the gentle rise and fall of her chest. Then she stopped. But then she started again. This went on a few times, the shallow intake, the rise, the wheeze out, the fall. Until finally, she stopped. From my seat I could see the flutter of her carotid artery. I watched that pulse slower, until it too stopped. I touched my fingers to it but couldn't be positive if I felt it still or if it was the throb of my own pulse. After about a minute I pressed her eyelids closed and they stayed that way and I stepped out to ask a nurse to check her.

I have seen other people die, but it was always with the safety of distance. This time I had held her hand and felt her life slow until I couldn't feel it at all. I don't know exactly what I felt. It wasn't fear or anxiety or even relief at its conclusion. What comes nearest I think is humility. I felt humble in the face of what happened, struggling to hold her one hand while she held a stuffed chipmunk in the other, and keeping the live flower her daughter had placed in her hair from tipping and rolling off her pillow. My entire role came to, "I'm here." There seemed nothing else that needed to be done.
Posted by bobby sneakers at 11:22 AM