A reason we ended up with Trump? 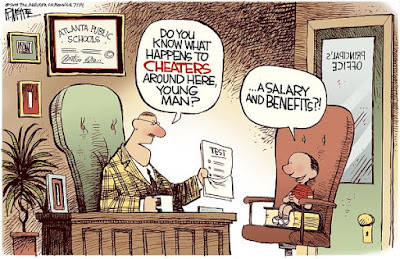 I've lately been reading a book about adolescence, A Tribe Apart by Patricia Hersch, which is, I'll be the first to admit, rather dated in its information, having been published in 1998. But precisely because of that I'm left to wonder if the following information, presented about the early teens of the mid-90s, who are parents now, is a good descriptor for what has led to Trump's election.

In 1992, a USA Weekend survey of over 236,000 young people revealed that 25 to 40 percent of teens see nothing wrong with cheating on exams, stealing from employers, or keeping money that isn't theirs. A 1989 Girl Scouts survey of 5,000 kids found 65 percent would cheat on an important test. A survey by the Josephine Institute of Ethics in 1992 similarly revealed that 75 percent of high school students admit to cheating...The biggest reason, according to 65 percent of the students, was that it was more important to get good grades than to be honest..."People are under lots of pressure. The attitude is that everybody does it, people don't look upon cheating as bad, none of your friends look at you as bad because you cheated." Everybody knows it is the wrong thing to do, "but I am not convinced that it is unfair when you are in a class you are never going to need again in your whole life but...the difference between a C and an A will make a difference in what college you get into.

Paradoxically, there is an ethic of cheating. This is how most students explain it...: It is easy and it is not always straight-out cheating. It is the little sneaky stuff like asking somebody from the period before what is on the test, or being absent so you know what is on it the next day. "Real cheating is having the answers in front of you while you are taking the test, looking at someone's paper."

The truth, and everybody knows it, is that to get into college an A or B is always better than something lower, and students' lives are so full of pressure and activity, especially for the smartest and most ambitious, that something has to give. "Even though we are told it will hurt us in the long run, that is a bunch of baloney...Maybe you are hurting other people and that may be unfair, but you are not hurting yourself. Why not take the easy way out if you can go home and be with friends for three hours or work in a subject that really matters to you...[?]" The bottom line is that "grades are more important because they get you someplace--getting good grades, not being ethical."

This may be the crux of the matter. In the Girl Scouts of America survey, it was found that by a huge margin the youth problems of the headlines--peer pressure, drugs, alcohol, sex, gangs--were not the "crisis issues" for kids. Their concerns were "the social expectations of the adult world which all have to do with pressure..." In times when society lacks clear ethical guidelines, when parents neither spend the time to educate about time-honored values...and personal responsibility nor necessarily model consistent value`s in their own lives, kids are responding to the one message they hear loud and strong from the adult world: Succeed. Do well. Do whatever you need to do...

Kids have grown up with a regular diet of people like Leona Helmsley, who ripped off the government; Mayor Marion Barry, who was reelected after being in prison for cocaine possession; Michael Milken and his junk bonds; Ivan Boesky and insider trading; Pete Rose and gambling. The list seems endless: Watergate, Clarence Thomas and Anita Hill, Lorena and John Bobbitt, Whitewater. Stories of killings for sneakers, parents who abandon their children, drive-by shootings. The students see inconsistent punishments or no consequences at all...

Somehow people keep on expecting kids to have a certain belief system or a commitment to certain kinds of values that are not evidenced with any regularity in their environment. Values do not spring fully formed out of nowhere. And cheating, among all the things people are doing that are not right, turns out to be fairly benign.

Get ahead any way you need to. Cheating isn't the worst thing you can do, and you have to do it because everyone else is and it's the only reasonable response to everything they expect of you. If you aren't caught, you won't be punished, and if you are caught, well, people will understand. There's a sliding scale of unethical behavior and you can always justify it by contrasting it with what someone else does or could do. Act like we tell you, not how we act. Most importantly, other people do a whole lot worse, and they're the real reason things are bad.

Is there a better description for what history will come to call Trumpism?
Posted by bobby sneakers at 7:16 PM