Guides on the journey 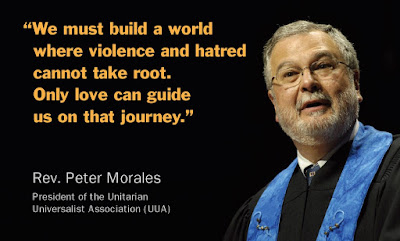 There isn't a reason my opinion would be sought out on this issue. But in the midst of the garbage fire that is the Trump administration, it's important to keep your eye on the smaller things happening that effect us on a different level.

To wit: the resignation of my denomination's president. This isn't like Pope Benedict XVI resigning, or even the resignation of Rowan Williams. I even find that many UUs are unaware of it. But within the hothouse world of Unitarian Universalist politics, while it's not a hot-button topic, it is cause for concern and speculation.

To understand it totally, you'd need to go back to the beginnings of the Atlantic slave trade; but you can get enough background by remembering the problems of the late 1960s. It was a different America, both for better and worse, and one of the ways it was better was the spirit of "can-do" optimism on the part of society at large, and one of the ways it was worse was the ability for much of the makeup of that society to ignore the concerns of its minority citizens. Here is a good timeline that explains much of how the situation came about. For a fuller examination, I recommend the books of Mark Morrison-Reed, particularly Black Pioneers in a White Denomination.

It was at least in part because of their behind-the-scenes treatment by the nascent Unitarian Universalist Association that many black members left, and it's perhaps a legacy of that period that UUism has fewer members of color than it ought. There is much in UUism that attracts black and brown freethinkers, but as Dr King said, Sunday morning remains the more segregated day of the week. Those who do belong watch carefully the way the organization refers to and treats them, with justification.

The presidency of the UUA has a fixed term and current officeholder Peter Morales' term ends in three months. The vote for a new president will happen at the annual General Conference. All three candidates are women, and are fine candidates. But all three are white women. And here is where it gets sticky.

When the retiring leader of the Southern region of the UUA, who is white, was replaced by another white man (and this is not a denigration of his abilities or his hiring), it was seen by members attending the Finding Our Way Home retreat, a group of clergy and religious professionals of color, that "the UUA had hired another white person over an unidentified woman of color who was a qualified finalist for the Southern Region job." That candidate, Christina Rivera, identified herself at the retreat as a finalist who was passed over because she wasn't "a good fit."

I have issues with Rivera's blog post. If I were to edit it, I would condense it and eliminate many of the remarks that suggest personal complaint, focusing on the need for diverse voices in leadership. But her primary point is important: "The Exec and First Management levels are the directors of departments and staff. They have the power, influence and autonomy to direct policy, resources and hiring. And autonomy is a huge measure of power within our dominant culture; who gets to decide the what, when, who and how of the UUA. And just seven are people of color. It is an insult to the over 100 UU Religious Professionals of Color gathered at the recent Finding Our Way Home conference to suggest that this is anything other than racial discrimination at the UUA." (Her emphasis.)

The charge that UUA leadership reflects elements of white male supremacy are merited. So, unfortunately, does nearly every other denomination. It's a holdover from the past, not only of the US, but of Europe. Typically, the landed gentry knew best, and in most European nations, the landed were white and male. There are deeply-ingrained assumptions and beliefs that society and individuals hold. There's nothing wrong or demeaning about accepting one's contemporary advantages and their having risen from historical ones. It is, literally, the least one can do.

At the retreat, President Morales was asked what his opinion was and, unfortunately, he answered like a CEO rather than a religious leader. (I cannot locate a quote of his response, only paraphrases.) It was essentially that, "If we had more qualified candidates of color applying for those positions, there would be more people of color in them." Even Morales characterizes his response as glib, of having reacted when he should have listened.

Black Lives of Unitarian Universalism, whose co-founder and executive director is a friend of mine, is correct in asserting that this is a "crisis" in our faith and correct too in noting that "Those seen as 'fully qualified' are usually white, usually ordained ministers, often cisgender, often male and able-bodied, often heterosexual, and otherwise fit into common notions of what leadership looks and sounds like." This is one of the elements of white supremacy, that the norm is white (and usually male) and that anyone else qualifies as exotic or foreign. It's a mark of the ubiquity of this belief that many of us don't even recognize when we do it on a personal or an institutional scale. It's a mark too of its insidiousness that Morales, the first Hispanic president of the UUA, repeated one of its tenets.

However, while everyone agrees he shouldn't have said it, no one called for Peter Morales' resignation. Friends among the UUA communications organization report, while there were a few calls from individuals, there was no coordinated effort, no one in the organization had suggested it, and no one thought it would solve the issue. It was completely out of the blue.

Morales is, of course, capable of making his own decisions and he wrote in his resignation letter, "I have clearly lost the trust of many people and my comments have become a focal point in the ongoing discussion. It is clear to me that I am not the right person to lead our Association..." But I am not convinced of the rightness of any of those statements. Many of us rolled our eyes at his comment and it may have been newsworthy for a day or two, but it and he have not been the focal point at all. That has remained the ongoing assumption among religious organizations that the de facto leader of any institution is a white male.

There are important issues our denomination has to grapple with; along with the above, there is the recent arrest of UU minister Ron Robinson on charges of child pornography, how we react to the maelstrom of Trump administration fiats, and the simple continuation of our faith in a world where the word has become synonymous with either cruelty or irrelevance. This is not a time for leaders to take themselves out of the game because they've made stupid comments. It's time to admit our mistakes and provide ourselves, if not as models, then as guides.
Posted by bobby sneakers at 4:39 AM