The heart is filled by water 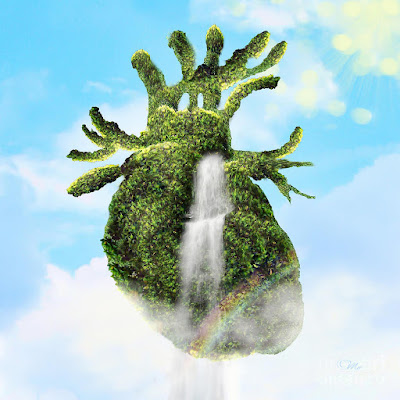 I used to think of myself as a forest person. I grew up in the woods of upstate New York, and one of my first memories of sheer joy was taking off shoes and socks and wading in the the stream behind the garages and down the steep bank. The stream, a distant cousin to the stronger Agawamik Creek further north, flowed lazily along the north end of our property and it was full of crawfish and tadpoles and water skippers and picked up speed as it narrowed. It was cool and wet and in places you had to look hard through foliage to see it. That's how I saw the world then, as something where things were hidden by nature and to find them you had to look hard.

I started thinking more like what Bill Holms called a prairie person when I studied poetry with him in graduate school in Minnesota. Things were still hidden in that view, but because they were closer to the earth, often right underfoot. You didn't have to look hard, you just had to notice them. Now I live on the edge of a Great Lake, which is like a moist prairie in what things aren't hidden but you do need to notice them. I often start my barefoot walking starting with the grassy hill about a half mile from my home that runs down to the beach and then northward for a mile or two, before disappearing under a pier and the weight of local businesses.

I've written of the jolt of recognition I experienced when I realized that, in doing this, I've come to live out the dream I had for myself 30-odd years ago. I've lived in several river towns--in the east and midwest it's almost impossible not to. Lakeside living was never something I had experienced before moving here, and in the winter especially I cherish it. In the forest, nothing ever seems dead in the winter; on the prairie, everything seemed dead when covered with two feet of snow, ice, and bitter wind; here on the Lake, there is a sound of life all winter long, even when the ice shelf covers a mile and a half from the beach, the regular pulse of water coming in and going out, helping me to breathe through the winter.

What brings all this thinking on is having read Terry Tempest Williams' An Unspoken Hunger: Stories from the Field. I hadn't read a book by nature essayists in a long while, and since I picked that up I've gone back to Gary Snyder's Practice of the Wild, an old essay collection from Anteus someone sent me decades ago, Peter Jenkins' A Walk Across America, Bill's The Heart Can be Filled Anywhere on Earth: Minneota, Minnesota, books about not only wandering around in the woods but stopping to look closely at what you're walking among and on. I expect I'll even go back to Annie Dillard's Pilgrim at Tinker Creek, the one that began it all for me. I have a first edition I picked up somewhere on whim 40 years ago that is so water- and sun-logged, its sleeve long since shredded memory, whatever value there might be to it rests in what the cost to recycling the paper might be.
Posted by bobby sneakers at 5:13 AM