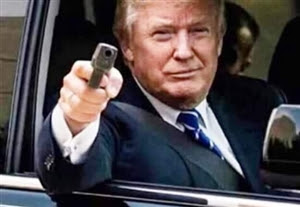 I'll admit it, I've been overwhelmed by events to the point where it's nearly impossible to keep up. The speed with which the Trump administration is unraveling is dizzying. Every day brings with it another eye-opening, jaw-dropping revelation that the citizens of the United States actively brought ourselves under a would-be oligarchy's diktat. Our only saving grace is that it was unprepared and is led by an undisciplined sufferer of affluenza.

Make no mistake: I'm glad for that. It's to our advantage that Trump is more Berlusconi than Putin. That it will implode is a given. It may not end in the bloodless coup in which the entire crony crew and family depart on Air Force One for asylum in the Ukraine in the middle of the night with only the clothes on their backs that I hope for, but that it will end ignominiously is certain. America doesn't imprison our wealthy so we won't see that. But oh how satisfying that would be.

The end of the last year saw me reading Philip K. Dick. That Dick is a writer for the paranoid is a truism that's reached the point of pointlessness. But it's still worth remembering that, while he saw filaments of his own chaotic anger and mistook them for the culture's, they were nonetheless wide-ranging enough to be understood as cultural as well as personal.

Radio Free Albemuth is, I think, the fourth Dick novel I've read, and fits so snugly into the narrative of a President Trump to fuel suggestions not only of Dick's paranoia but his prescience. I'm hardly the first to note the similarities between Ferris Fremont, his version of Richard Nixon, and Trump, and frankly the differences are more disturbing because of what it says about the American people. While Trump's ascendence to the presidency is not as planned or controlled as Fremont's--he didn't arrive in the wake of a mandate, for instance, although his supporters were and are seeking something outside the political norm, which is a kind of unifying position (but not capable of being acted on, the equivalent of rallying behind someone holding a sign that says "Follow Me!")--the effects after he takes office are as disturbing.

No one had put a pistol to Ferris Fremont’s head. He was the pistol itself, pointed at our head. Pointed at the people who had elected him."

Is there a better descriptor for Trump than a pistol held to the brows of his own supporters?
Posted by bobby sneakers at 5:59 AM