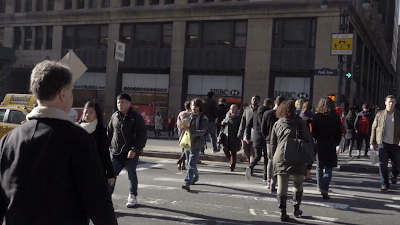 Here in the upper Midwest, the winter has seemed both fast and never-ending, with high temperatures and then bone-chilling wind and snow. It makes for a hard slog for some of us who are just keeping our heads down closer to our center of gravity and hoping we make it through the next whim of the cosmos.

"Whim" is an excellent term for what the past two years under Trump have been: We've been subjected repeatedly to his whims of how he theorizes a leader ought to act--that is, unilaterally--rather than the compromises that stable governments rely on to accomplish things. His supporters might decry compromise as "the swamp," but the truth is, like everyday life, it's full of the give-and-take suggested in crossing the street in traffic.

I remember decades ago, when I was a participant in the cult Direct Centering, I was at a weekend seminar and decided to put to the test the guide that "You are powerful, you make it happen," in this case by making traffic stop in Times Square as I crossed the street. I stood about mid-block and stepped out without looking up and got maybe four feet into the street when someone honked. I looked that way reflexively (though I'd told myself before I wouldn't, fearing that would dissolve my resolve), and there was a car with someone in it about thirty yards away and bearing down in my direction. He or she wasn't aiming for me, of course, but was turning and that's what the lane was for I stepped into. The honking was a not-unfriendly warning to me that I was otherwise going to be hurt.

I jumped back. The car passed by. I don't think the driver even glanced my way.

I decided to cross at the walk and make traffic stop there. I stood in the apron all New Yorkers stake out where the street and the sidewalk merge and was ready to step out, when I realized something: I didn't need to do this. Despite what I had been told, that I was powerful and I could make things happen in my favor, this was a pretty foolish way to do that. Even if I did do it, stop cars mid-drive as I strode across four lanes, what would that do? Prove perhaps that at that moment I had forced multiple drivers to acknowledge my ability to bully my way across the street without taking into account their need to get somewhere, and, more importantly, their ability to hurt me. Was that really a good use of the power I'd been told I had?

I decided I was so powerful that I didn't need to stop traffic so I could cross. Traffic, by obeying the rules, would do that for me. There wouldn't be much chance of getting hurt, no one would be mad at being inconvenienced (well, some drivers might, but to put it in DC terms, that was their attachment), and everyone would go on smoothly.

I look back on that chutzpah and laugh at myself. It wasn't power that did that, or if it was it was the power inherent in accepting the method that had been worked out before and smoothed the way for both drivers and pedestrians. By waiting at the crosswalk for the traffic to stop of itself when the lights changed I wasn't giving in, I was accepting the wisdom of the street. If I wanted some sense of having thwarted the system, I could use the good old New Yorker method of waiting until the traffic thinned enough to cross one lane at a time, stopping for each coming car to pass before walking calmly (or running) across the next lane. I'd piss off a couple drivers, but they were unlikely to do more than swear at me, the New York equivalent of "Hi, there."

We'd all accomplish our objective, they'd end up wherever they were driving to and I would get across the street without doing it from the back of an ambulance. The power lies not in the individual forcing his will but in the people moving as one.

Posted by bobby sneakers at 3:53 PM