a congregation of one 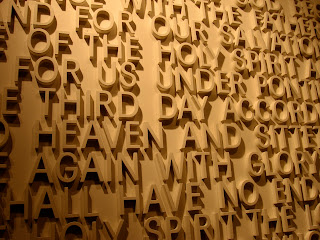 "Every man will have a creed of his own," wrote [Needham, Massachusetts] pastor Stephen Palmer..."I have mine, but have no right to impose it upon others, nor have others any right to impose theirs upon me...He who thinks he has no more light to receive, has seen but little; and he who is not open to conviction is in bondage to himself."

--from Universalists and Unitarians in America:  A People's History by John Buehrens

This idea, if not this quote, opened up an intense discussion in a small group forum during our UU polity class last week.  We had assembled to discuss whether our principles and purposes are a contemporary help or a hindrance.  Early on the question "why don't we have a creed?" came up and from there the better question, "are we afraid of a creed?", was spoken.

The answer to the first question is suggested in Palmer's quote:  Unitarian Universalists as a group don't have a creed because we aren't free to impose our own convictions on others and they aren't free to impose theirs on us.  The distinction between agreeing with a conviction and insisting on it being the way people ought to behave is a fine one that seems lost on so many who would insist on the US being a Christian nation.  I agree with a number of Christian convictions--treating others as we'd like to be treated and obeying god (as I conceive god to be) are only two examples--but I don't identify as a Christian because I don't accept a supernatural force outside existence.  (Besides which, there is the issue of "which" Christianity some people are arguing for.  In terms of sheer numbers, Protestants are the predominant Christians.  But "Protestants" are a huge umbrella term, incorporating everyone from the Latter Day Saints to the United Church of Christ.  If we are talking just a single denomination, the US is far and away a Roman Catholic nation.)

The answer to the second question, according to many UUs, is "no."  But I think it's "yes," although maybe "afraid" isn't quite the right word.  We have these terrifically anodyne Principles which are and read like they are written by committee and fulfill a lot of functions.  They give us something to point to when asked "what do you believe" and something to rally around when we sense our rights as citizens of faith are threatened.  But to paraphrase Walter Royal Jones' famous question, No one asks to have the Purposes and Principles read to him on his deathbed.  They're a package of words most of us can agree to, but a Mission Statement will itself never be included as a prophetic source.

He "who is not open to conviction is in bondage to himself," Palmer writes, and insofar as his earlier point, that individuals need a personal creed, he is right.  The problem lies in that my personal creed may countermand yours and neither one of us really wants that.  None of us would, or should, want to belong to a congregation consisting of one--one person, one thought, one mission--and despite claims that are made in its favor, and the beauty sometimes of its language, that is precisely what a creed does:  Reduce a congregation to one.  Yes, we are "afraid" of a creed--if by fear we mean a wariness brought on by history and experience--but it may be good to be so afraid.
Posted by bobby sneakers at 7:35 AM