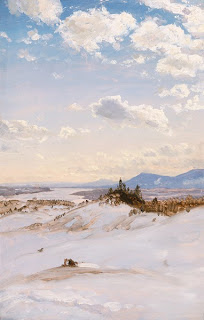 In 1825 the young English painter Thomas Cole made a sketching voyage up the Hudson River.  Even by 1825 the valley was tamed and pastoral, hardly wilderness, but just to the west in the Catskill Mountains, Cole found a wild as yet unpainted landscape, with high craggy peaks, precipitous valleys and falls, and a dark forest that ranged ever westward to the Great Plains...[Like] many of the Romantic painters of his time, he was attracted to the noble, ancient scenery of the classical Italian landscapes, with its inspiring ruins and its tamed, pastoral vistas. But after his return to America, Cole discovered a land that was new to art.


His metaphorical landscapes of the Hudson River Valley found willing viewers in a swiftly urbanizing nation, and his work drew a number of fellow artists to the region...Although they painted outdoor scenes, these artists were not plein [sic] air painters. They would make sketching trips into the wilds and then return to their studios to construct immense, narrative canvasses depicting, sometimes with exaggeration, the pastoral landscapes they had witnessed. Although they never thought of themselves as a group, the painters were given a name, the Hudson River School. They spawned in midcentury another school of American landscape painters led by Frederick Edwin Church...[who] concentrated on the awe-inspiring wilderness of the American West.

In 1836, having found his querencia, Thomas Cole settled in the place, on the west bank of the Hudson in the town of Catskill.  His disciple Frederick Church had by the 1860s ranged far beyond the Valley and was best known for his bast canvasses of sublime, terrifying scenes...By the early 1870s Church was one of the most popular and also one of the richest painters in America, and when he decided to build his dream house, he returned to the wellspring of his inspiration. He selected a height on the opposite bank of the Hudson River from the home of his mentor and there constructed a great neo-Persian manor with sweeping greenswards and grand vistas down to the river. This was not simply a dwelling place for Church and his family; the site was carefully chosen for what the Chinese geomancers, had they been consulted, would term feng shui, a sparsely treed height above water where the air and the wind were propitious. Furthermore, Church designed aspects of his own life and travels into the house, layers of meaning and metaphor. Students of the design of the place, which he named Olana, see it as one of his greatest works of art.

--from Walking Towards Walden: A Pilgrimage in Search of Place by John Hanson Mitchell 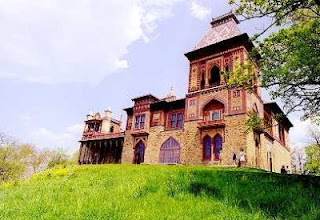 As I was growing up Olana was a regular visit, both for school and for personal/ familial pleasure. One of my first memories of being outdoors somewhere unfamiliar I recognize now as among the great open space of the parking lot.  I associate the tang of cedar smoke with the place. Decades later, divorced and staying in my parent's driveway, I would cycle to the house and sometimes along the wooded trails that lead down to the road to the river; and later, remarried and smoking a pipe, I'd take our lone Good Grey Dog walking along the same trails, discovering all kinds of physical connections between the house and the adjoining property of the local community college.
Posted by bobby sneakers at 5:35 AM