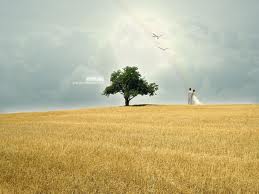 One of the things I'm discovering in the course of conducting weddings is that some terms with which most seminarians and religiously-interested are familiar, like homily vs. sermon, are not understood by the general public. So that yesterday, after I'd conducted my tenth wedding with my ninth couple, the bride asked me, "Did you know all along you were going to change the service?" from the previous night's rehearsal. I said I didn't understand, and she said, "All that stuff about dogs and dirt you said, you didn't say any of that during the rehearsal." I said, "No, that was the homily, I hadn't finished it until this morning; but I mentioned last night during rehearsal, 'here's where I read my homily, about five minutes.'" It turned out she had no clue what a homily is, so my wife points out I ought to rephrase my comments about it in the future to "short sermon."

Here, then, is my short sermon from yesterday's wedding.

Most of you are aware that [the bride's] dog Mistie ran off a month ago. Some of you may be aware that my wife , [the groom’s] sister, and their [other] sister and I joined in searching for Mistie for two days before she was located safe among a nearby pack of dogs. I searched the north and southwestern ends of the farm property with one of our dogs.  What many of you are not aware of is that when I first moved to Wisconsin in the early 90s I worked the farm here with Joe and his dad in exchange for room and board.  If I hadn’t had the realization before then I figured out working here that I would never make a farmer.  I’m a good farmhand:  tell me to make this big pile a littler pile I can do that.  But it never occurs to me to make the pile littler. So when I didn’t have a shovel in my hands I wandered the property. Searching for Mistie gave me the opportunity to do that again.


While I don’t ask you to take your shoes off, this is nonetheless sacred ground. This acreage hasn’t just fed [the bride and groom]; trillions of creatures that have wandered across it over millions of years found sustenance here. Some of those creatures are still around. If you’re a farmer or a hunter or just a wanderer like me you’re likely to recognize and identify a lot of them. My dog and I noted all kinds of life as we ranged over the farm, including twice visiting the spot we’re now standing. Mistie wasn’t here, but we took pleasure in looking here anyway. Dogs are great for experiencing the sacred, maybe because they have no agenda. My dog wasn’t looking for Mistie, he was just ranging with me. You people with dogs, watch them when you walk a new place.  Their ears are more alert, they hold themselves a little taller and straighter, and have a certain bounce in their step that suggests they’re dancing.


Mistie, of course, made it back home.  This farm is home to Mistie and Buck, of course, and to [the bride and groom]. If you haven’t spent appreciable time here you owe it to yourself to do so.   This farm is home as well to turkeys and deer, coyotes and fox, rabbits and shrews, ants and gnats, the large-footed and the tiny-footed. It’s also home to trees and brush, rocks and soil, algae and moss, bacteria and protozoa, and good old-fashioned dirt. There is life here, not only in what breathes and grows but in the plate tectonics that shift like the earth’s crust is exhaling and push stone forward and up, a kind of growth. Some of you know that just a gram of soil may contain more or less a billion microbes alone. If you climb one of those deer stands you can get a pretty good aerial view of portions of the property and help gain a better perspective of just how much life goes on here.


Unfortunately, [the bride and groom] can’t demand rent from these billions of neighbors but on the plus side they are unlikely to stop in to borrow some sugar or the lawnmower.


Like any other ecosystem, marriage is composed of living things. It’s in the nature of living things to grow. [Friends], you have no intention in your second marriages to have children but that’s not to say you aren’t raising a family. Consider the improvements you’ve made on this land. Consider the improvements you’re making on your home together. Then there are all these children, sons and daughters and grandchildren and nieces and nephews and grandnieces and grandnephews. Whether any of them continue to live here after you yourselves are dead doesn’t matter. Their being here now is an improvement, a gift to you.


But in addition to Buck and Mistie, in addition to the kids, in addition to the horses and cats and raccoons and mice and flies and tadpoles and corn and soy beans and aspen and milk weed and thistle and tiger lily and blackberries and fungi and earthworms and thermophiles and bacilli and rhizomes, your marriage itself is a living being that breathes and grows in the same mysterious manner all the other things do.  It isn’t, can’t be, an inert thing that, once this service ends, comes into sudden existence and, years from now, suddenly ceases to be. Your relationship, like the soil and grass on which we stand, is a holy thing and it has its own life.  Keep your marriage safe, keep it well, keep it fed. Like a dog, like a plot of land, it will reward you with long service, a kind of love itself.
Posted by bobby sneakers at 12:29 PM