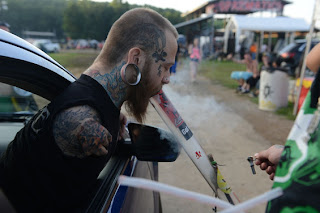 I don't like the music of Insane Clown Posse but I'm not the audience for it either.  I do, however, like the fact that the Gathering of the Juggalos exists, and further that Juggalos and Juggalettes exist.  As with most distaff communities, it is meant to provide a family into which nearly anyone can fit.

I don't know if I would attend a Juggalo Gathering myself, although judging from photo essays (most of them provided by Nate "Igor" Smith of the Village Voice) they are not unlike most Rainbow Gatherings, except with Faygo and more cigarettes.  There have been really well-done essays about the Juggalos as well as some trashy, sensationalistic ones.  There is even a backlash against writing so much about them (can a TLC reality series be far behind?). I haven't seen it written about but I've noticed in various photo essays the increase in the number of people of color, both Juggalos and Juggalettes, in attendance.  That pleases me.

But what I am most pleased by is the sense that anyone, of any body type and any ability, can be accepted as a Juggalo (so long as that person is not Tia Tequila, apparently, although to be fair I suspect her shit-tossing critics were responding to their being used for her publicity rather than their tribe's).  This is the impetus behind religions of the Book, that one can be a member of the hospitable desert tribe if one abides by certain rituals and accepts certain beliefs, no matter how one is born or the condition one finds himself in. Where you go I will go, and your people will be my people. There is no Jew or Greek, no male or female. When you pledge allegience to another person you pledge allegience to God.  Will we see in some far-off future a Juggalo-influenced adjunct to Abrahamic religious?  Violent J and Shaggy 2 Dope came out a few years ago as Christians, so why not? Why not a Saint Juggalo, a Mother Juggalette?
Posted by bobby sneakers at 7:16 AM