We can't just mark a ballot 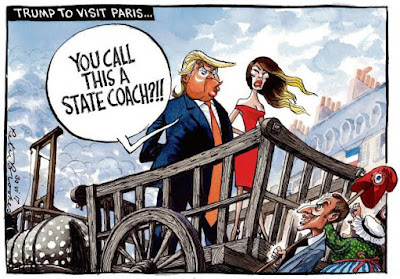 Before becoming a minister, my field was literature.  The most important lesson in criticism is not to criticize a work for what it's not. I published a recent sermon a few days ago which garnered many responses on one of the FaceBook pages I link to, most of them negative. My sermon was not intended to be a call to the barricades. I would love to storm the Bastille, but tell me where it is in 22nd century America. Is it in the school board? The town hall? The state capitol? Congress? The White House? It's a genius of democracy that power is diffuse, and to use it we need to know who to address. I know my congregation audience. One response I especially appreciated was a friend coming forward to say she, who had never been to a public protest in her life, would attend the next one with me. That's the best I could want.

I'm uninterested in responding to the criticism. Again, from literature, the work stands or falls on its own. But it did leave me wanting to make a stronger statement about the responsibility we have as people of faith to call it as we see it. This administration is actively involved in crafting and doing evil to the people least able to defend themselves among us: immigrants, children, the undocumented, non-Christians, women, people who work with their hands, gays and lesbians, members of the trans~ community, the poor who rely on government services and the poor who work for minimum wage and less, the homeless, the mentally ill, native Americans, the sick and the dying. In short, the members of the Beloved Community who most need community.

We're reaching a vote soon that can do some real good, that can put into place the actors we're counting on to move the country back in the direction of helping, not hurting. Of giving, not greed. But even if we win every single seat we hope for it means nothing without our involvement. When Obama was elected, our work had only started, and it was going to be a long, hard slog, even with an ally in the presidency, to accomplish what we need to. When he won reelection, we needed to continue working, maybe work harder.

We have been lazy, leaving it to others to do the things we need done, as if we can mark a ballot every couple years and that does it. That's why one of the greatest presidents of my time has been followed by one of the worst, why he has taken it as his mission, and his supporters' mission, to dismantle even the few good things we accomplished to help people who need it.

We can't change that direction with cobblestones or bullets, even by overturning tables in the temples. We have to work together, understand one another and our friends, and make the changes necessary. And then we have to pay attention.
Posted by bobby sneakers at 6:18 PM