Some don't need to ask 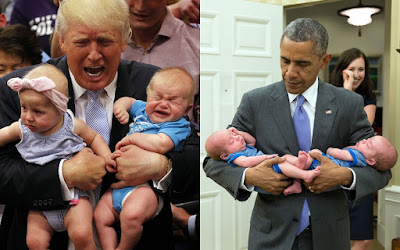 I was having lunch at New Paltz's Gay 90s Bistro with a friend who lived in the same community house I had. After, we noticed a mutual friend was working the grill in the kitchen and he called her out. She stood behind the counter and he said, "Give us a hug."

She leaned across and, dutifully, did so. Then she leaned over and pulled me into one of her own. I said,"Oh, I get one too?" She said, "Of course you do. And you, you don't need to ask."

Decades later that's something that sticks with me. That there are people who need to demand hugs and those of us who get them without asking. Donald Trump, we know from his own admissions, is one of the former. Barack Obama, as we have seen for a decade, is the latter.
Posted by bobby sneakers at 6:28 AM