A post on a friend's Facebook page has given me pause to think since last night.  It's not that she wrote something with which I disagree or that is offensive, but the situation she describes, and the comment I made about it, has gotten under the thin skein of fluid housing my cerebellum. 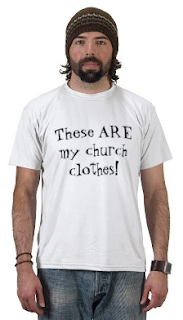 She is a Unitarian Universalist minister on a flight to Kentucky where our faith's General Assembly is being held this week, and she noted that, shortly after takeoff, she was belted in and two men seated behind her started talking and dropping f-bombs one after the other.  She said she ended up huffing and grimacing like the Church Lady in hopes they would stop.

Several friends chimed in with suggestions about the rudeness of their remarks and ideas for her to turn the responsibility back onto them to end their constant "fuck" repetition.  My favorite was one friend's suggestion that she out-"fuck" them:  "Fuck!  Someone already fucking did the fucking crossword in the fucking in-fucking-flight magazine.  Hey, you fucking guys got a fucking magazine that isn't fucking filled-in?" turning around while wearing her collar.

My comment, after some reflection:  "Think on this:  this is the way American men talk today.  If we're going to be a viable faith in the future we need to speak their language."

Now I have admittedly made some major assumptions, among them that these were young, white men who either don't have children or who are luxuriating in their freedom away from family.  Young men, especially young men without children, are disappearing from congregations, if they ever appear there. But perhaps my greatest assumption, and one I'm loathe to give up, is that Unitarian Universalism or any liberal religion, has anything to say they would want to hear.

This isn't another post about the decline of congregations.  This is one about the concern I have that, in becoming something that so many of us are surprised we became--religious people, spiritual people, people of faith--we have either lost a sense of why it was that we avoided organized religion or we have gained an appreciation of what our younger, coarser selves would have scoffed at.

My friend's reaction is telling, because I know she is someone she is surprised she's become.  That she would have a Church Lady reaction or recognize in herself that she's embarrassed to admit having that reaction comes from her younger, wilder, less-ministerial years.  And many of us have that:  I think I am more astonished at the role I've taken on than a lot of my friends from earlier in my life (funny how others seem to see what we ourselves may have refused to) and do my best to counter the stereotype of who I am now with reactions I think my 25 years-ago-self would approve of.  When someone on finding out I'm a minister half-jokingly suggests he'd better watch his language around me my automatic response is, "Fuck that shit."

And while that's always good for a laugh, and as shorthand for where I stand and what I stand for, it says something too about who I can talk with.  As my friends and students know, my conversation is peppered with a lot of gratuitous swearing.  I love to swear.  It's both a release and a signal that I am not afraid of saying something offensive.  Sometimes I think it has led to my being passed over for promotion or positions, especially when I reference conversations with students, particularly convicts, and repeat them verbatim.

I'm pretty certain it isn't just me who likes to swear.  I hear a lot of people doing so in casual conversation, on their cell phones, in talking with their kids and friends, and sometimes in expressing anger or surprise.  It's like a freedom our society has granted us, and whether that's good or not I can't say.  But I think I can guarantee it's not going away.

By the same token, while we don't like to hear profanity in our churches and temples and mosques, it's coming there too.  It has to.  It's a nature of the beast.  I don't mean to suggest we should swear in our sermons, although I've been known to draw a mighty fine line, but conversations at least are becoming less formal and that's reflective of what our places of faith are becoming.  The same idea is reflected in our informality in dress:  at least in the congregations I attend, there are very few people dressed in what used to be called their Sunday Best.  And while there aren't many who are coming in sweatsuits, that line is also being touched on.

This greater informality of peoples' speech and dress is the future.  They will raise their families in our congregations if we give them reason to attend, and for that to happen we will have to let them talk the way they talk and be able to respond appropriately.
Posted by bobby sneakers at 3:09 PM