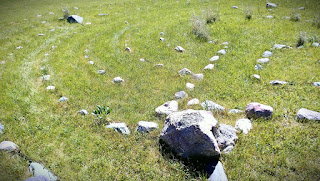 We were driving home Sunday afternoon from Detroit Lakes on the far northwestern edge of Minnesota where I had performed a beach wedding for some friends the day before when we came across a sculpture park along the highway.  We stopped to gawk and were astonished to find, among the metal dinosaur skeletons and Eiffel Tower and impressionist take on a woman staring into the north sky, a place of incipient holiness.  At first we took it to be a clump of rocks disbursed unevenly on the ground and then my wife, who has become an afficianado of them, recognized it for what it was:  the outline and borders of a labyrinth.

We shucked off our sandals and walked it slowly and deliberately.  It was obvious from the overgrowth that no one had mowed it more than once this season (hard to see in the above photo), and it was entirely possible ours were the first feet to travel it for a while.  On the way in I could see the impressions left by my wife's big feet on the grass and weeds, and on the way back out mmy smaller, jerkier impressions were beside them.  Larger rocks were interspersed at switchbacks and I took a moment to sit on them and look at the sun, the grass, the rocks, the path, the road within spitting distance, the woman trimming around the sculptures.

I have trod many labyrinths in my time in different parts of the country.  One of the ones I remember most fondly was the reamains of one that had been assembled and then discarded two years before on the site of a Rainbow Gathering in Pennsylvania.  A few minutes into our practice, my wife, who had vetoed going to church that morning in favor of getting an earlier start, shouted, "I've been to church now!"  Her excitement, commenting how this was only the fourth labyrinth she has traveled--one at her church (and that was responsible for her enthusiasm), one at our school, and the one we built in our front yard (below)--reminds me of the sanctity to be found between these narrow paths that go in and then back out, the journey into and out of oneself, the holy path we follow intently.  It was a good reminder of the sudden appearance holiness can make in the midst of ordinary experience, the way liminal events poke their way into banality. 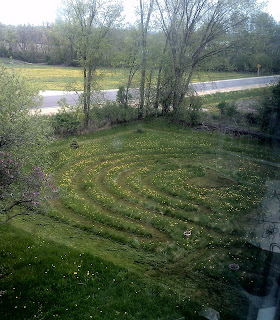 Posted by bobby sneakers at 5:39 AM