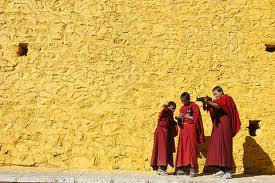 I'll admit that like almost everyone else today I get the bulk of my news from the internet.  But I still keep a toe submerged in old media, maybe because old habits are difficult to break.  I buy one of the papers from the hub three days a week, partly because I like to keep up with hub-related stories but mostly for the NYTimes crossword.  I also receive a few magazines, mostly religious, to keep up with ideas currently in play.

I also receive Time magazine.  Its usefulness as a news source was made irrelevant a generation ago, and it really hasn't had much in the way of trenchent reporting since at least 2010, when Joe Klein wrote a shocking story about the "useless war" in Afghanistan.  It continues to print controversial images, but that's PR not information.

Still, on occasion I find something that surprises me, something I hadn't heard about before, or wasn't aware of connections between events.  Such is the story "The Face of Buddhist Terror" by Hannah Beech in the current issue.  [Note that the link is not to the story itself--Time insists on a paywall--but to a story about its subject's reaction to the story.]

It isn't that I was unaware of the use by some Buddhists to read (or willfully misread) the precepts in a way that condemns or demonizes an Other.  That is an old, old story, and Beech's somewhat lackluster closer, "It's hard to imagine that the Buddha would have approved" of the violence some monks are fomenting against Muslims, could be the tagline to any story about any religion and the beliefs of its more radical adherents.  I don't think the founder of any religion today, including L. Ron Hubbard, would recognize its contemporary version.

But many of us, and I would include myself, tend to endow Buddhism with the simplistic notion that it's all meditation, rice, and peace.  But that's to infantilize a religion.  We forget, or maybe never know, about the 1999 South Korean brawl between rival Buddhist factions over control of a major temple.  Or the importance of Buddhism to the actions of Aum Shinrikyo.  Or the role of Buddhists in Sri Lankan nationalist violence.  It is easy to forget, in our contemporary metropolism, that for many spiritual people, God, or inifinty or reality or the universe, has teeth.  And is not reticent to use them.

However, I have been aware of all those things, but I wasn't aware of the growing influence of Ashin Wirathu, the self-identified "Burmese bin Laden" who leads a group called 969. His group's violence has been felt in the deaths of many Rohingya Muslims in Myanmar, but may be poised to become more influential.  That is, at least, what I think Wirathu would like.

[On that last link, I think that Dr. Muang Zarni lets off Buddhism too gently by describing the adherents of the 969 movement as "Burmese men in monks’ robes."  This is, again, to infantilize the religion, to suggest that there is nothing in Buddhist history or scripture that can be interpreted as Wirathu does.  This is simply not true.  Zarni's attempt is equivalent to saying that Fred Phelps is merely pretending to be a Christian, that the Taliban merely put on the garb of clerics, or that Baruch Goldstein had merely emigrated to Israel in order to kill some Arabs.  Similarly, in my own faith, it is to pretend that the eugenics movement had no important Unitarian popularizers.]

Posted by bobby sneakers at 6:16 PM