I remember rock and roll radio 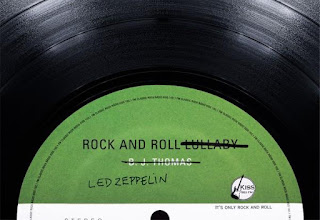 One of the greatest pleasures when I was an adolescent growing up in rural upstate New York was listening to the radio.  Not so much during the day; we lived in the foothills of the Berkshires and there were only a few stations we got in clearly enough, and most of them were country music (made up of the likes then of Charlie Rich, Glen Campbell, Anne Murray, and the Oak Ridge Boys, although my folks listened often enough that I was aware of Jerry Reed and Charlie Pride and Hoyt Axton) or bubblegum and disco (although one of my favorite songs is disco) or easy listening (nope, there's nothing I fondly remember of that.  Except that my dad would hum and whistle along to the songs while driving).

But at night I could pull in stations from far, far away on my little clock radio.  At first I had one that was only AM but I managed late at night--after 10, when the local stations had signed off--to catch WNBC (where I first heard the non-"Angie" Rolling Stones and Al Green) and WKBW (whose edited-in station ID--"KB15, music machine"--I can still hear listening to some of that era's songs) and WLS all the way in Chicago (where I first heard Sweet's "Ballroom Blitz" and David Bowie).  But then I saved my money after working the neighbor's farm for a summer and bought an AM/FM one whose dial stayed on frequency more reliably.  I could receive more stations but I'm shame-faced to admit I listened most often to WRVE "Rock 99," a contemporary hits station that played commercial-free all night long.  While it had more than its share of bubblegum--Sean Cassidy and The Pointer Sisters and Richard Harris (!)--between them I could reliably hear Led Zeppelin and Bowie and Stevie Wonder and my beloved Al Green.

When I first saw this Ramone's video I identified with the lines "do you remember lying in bed, with the covers pulled up over your head, radio playing so no one can see?"  That was exactly how I experienced rock and roll radio.  And while admittedly I listened to a lot of crap during that period--how could one avoid it?--I also heard enough to buy Devo's Are We Not Men? and John Lennon's Rock n Roll and Bowie's Diamond Dogs and David Live and Roxy Music's For Your Pleasure and Marvin Gaye's What's Going On? and nearly everything ever recorded by Lou Reed and the Velvet Underground.

If it sounds as if I'm declaring my bona fides, I suppose that I am.  I'll own it--I am part of the reason rock and roll sucked the big moose (a local high school phrase) in the mid and late 70s.  But I was also among the first in line when Rock N Roll High School opened at Allston Cinema.

Posted by bobby sneakers at 8:25 PM