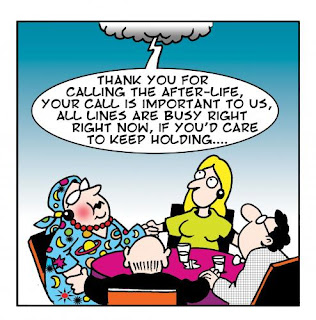 A few days ago a friend in my class on Unitarian Universalist history and polity did a presentation on the mid-19th century confluence of Universalism and spiritualism and it brought up many things for me.  My own experiences and history with spiritualism, by which I mean contact with the dead, ghosts, possession, in effect the supernatural, and so separate from spirituality, is complicated.  My history is studded with the supernatural and now I have a deep, abiding faith that there is nothing super-natural--that is, there is nothing that is outside nature--in our experience, up to and including god and spirituality.

My mother considered herself a devout Seventh-Day Adventist, and while she kept the Sabbath holy--outside of attending church in the morning, our Saturdays were usually homebound--she was also a fervid reader of Fate Magazine and books by and about Edgar Cayce and for decades she visited mediums and seers, sometimes dragging me or my sister along.  She spent untold thousands of dollars on an ultimately frustrated search for contact with Something Else.  When she died I don't think she was any closer to feeling satisfied with her search than when she started.  She fully, almost desperately, believed in both an afterlife and a supernatural world that existed alongside this one and that collided with it.  She taught me to use a Ouija board and divination pendulums and to read tea leaves and tarot cards.

(For his part, while he believes in a personal god and a redeeming Christ, my dad never had much truck with anything otherwise supernatural, and shortly after my mom died he left the Adventists to return to his childhood Methodism.  He says he feels more at home with the people there.)

I read mom's Fates and Cayce books and a ton of others about UFOs and communication with the dead and reincarnation and yetis and ghosts and all manner of other phenomena.  I believed I lived in a world where mysterious things happened and where I was one of the few who saw or experienced them.  For the same reason I was eventually drawn to Gnosticism, the Rosicrucians, Santeria, Gurdjieff followers, the Sufis and other secretive groups.  I wanted to draw breath in a magical world where there was something large outside myself that existed parallel to daily, mundane reality.

I question one historical assertion my friend made, that Universalism and spiritualism divided in the late 19th century each to its own camp.  They may have done so publicly but I am convinced spiritualism simply went underground into what eventually became UUism.  Nearly every congregation I've come in contact with has multiple members who cross whatever bridges Unitarian Universalists would claim they burned.  My initial experience with a UU congregation came about because of my involvement with a group of followers of Ramtha whose fringes I was on in Woodstock.  I made contact a year later with a larger UU fellowship through members of Eckankar.  (It shouldn't surprise any of my friends that I was involved in both groups because of women I dated.)  When I served a UU congregation in Wisconsin there were several closet followers of Kryon. There are members of UU congregations I've met in the hub for whom fairies are a real presence, as well as others who quietly admit to leaving out offerings for the "little people" who help them with their gardens or who protect their homes.

I will admit it now:  I am guilty of listening quietly and respectfully to each person who relates to me his or her belief in these things, smiling beneficently on the outside and inside thinking, "You are fucking nuts."

I feel that way, not despite my own experiences--because I have had brushes with something Other; I've seen ghosts and spoken with the devil, heard unearthly music--but because of them.  In each of my experiences, I've realized on meditation and reflection, that I can't be certain I wasn't dreaming or mishearing or seeing something that can be explained in some other way.  It does not, despite my earlier dread, make the world a duller place but a more exciting one because the deeper mystery is how to parse out the way my senses and my eagerness to accept something at face value has fooled me.

Does this mean, because I am certain I've hallucinated these experiences, that everyone's experiences can be explained away likewise?  Of course not.  Other people have different experiences than I do.  But I've never experienced anything I couldn't eventually accept as a naturally-occurring event and I suspect neither has anyone else.  It's not as if I don't want to believe this:  I've often said I wish I could be an evangelical Christian, not for the certainty but for the comfort.  I'm convinced there is something bigger than me but I'd call it, after Thomas Lewis et. al., limbic resonance, the beloved community being greater than the sum of our parts.  This is, for me, God, the tapping into something like the Cloud, I suppose, or Jung's collective unconscious.

I can't begrudge my mother her search and I'm self-knowing enough to recognize I'm on a similar one.  I followed her path for some distance and it eventually petered out.  This one may too, or I may round on myself and end up rejoining her.  William Blake and C.S. Lewis and Rumi and the compilers of the Zohar found their spirituality liberally dusted with language, terminology and concepts they could only articulate as magic or super-natural, and it is presumptuous to suggest I'm more advanced or a better observer of humanity than they are.  But I'm also aware how deeply uncomfortable I'm left hearing the words, "I received communication from Kryon for you last night."
Posted by bobby sneakers at 7:22 AM