the end of alice review

The End of Alice Review


(Fair Warning:  The following includes disturbingly graphic descriptions of violence on a child.) 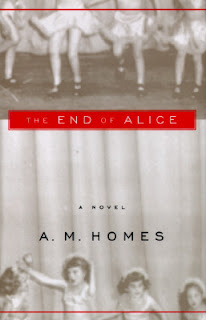 This is a horrible, horrible book. It is disturbing, pessimistic, misogynistic, angry, flush with anger and a lust for destruction.

Which is exactly what it should be. You should not write a novel featuring child molestation and murder without breaking a whole carton of taboos. Such a novel must be written because pedophiles are our fathers and brothers and sons and, as we’re coming to increasingly discover, our mothers and sisters and daughters as well.

The End of Alice is famous, or more accurately, infamous for its portrayal of the unnamed narrator who has been imprisoned since 1971 for the rape and murder of twelve year old Alice Somerfield. The novel is told primarily from his perspective, although he has a correspondent, a nineteen year old girl, who also narrates some of the story.

More on her in a bit. Some reviewers have called A.M. Homes’ third novel a page-turner, but it wasn’t that for me, either my first time reading it, nearly a decade ago, nor my recent rereading. And again, the acts it describes and the mind Homes tries to mirror shouldn’t lead a reader to flip pages (except maybe in self-defense, the way some people hide their faces during gory horror movie scenes). But those scenes are just as important as any exposition and, in some ways, may be even more important because they present us with a safe way of seeing the world from a very different, skewed perspective.

Here is a short, less graphic scene to suggest what Homes is getting at in these stabs at an unsanctioned perspective. The narrator is telling us of his responses to many of the letters he receives in prison, “Requests on university letterhead for an interview, an extensive study, a few questions to be answered, research papers, a book.” He is uniformly dismissive in his written response.

However, if you are open to suggestion, I would wholeheartedly recommend several men here, in particular my buddy Clayton, who allegedly—and more than once—fucked men on the Christopher Street pier and then pushed them into the Hudson River…To hear Clayton [who is also the narrator’s sex partner] tell it—and he rarely does tell it—the men he fucked were so taken with the events, so absorved with the back and forth of the in and out, that when it stopped, when Clayton breathed a sigh of deep relief and shot high into their asses, the men surged forward, flinging themselves into the water. And Clayton, so suddenly drained, so recently depleted and a nonswimmer himself, would go to the edge and simply scream, howl at the water, at the night, offering his arm, his hand, his fist, to the men, who were already dipping under, flailing far from Clayton’s reach…[Good] luck with the project


Similarly, his victim Alice is viewed by him entirely differently from the way we expect a twelve year old girl to behave. She flirts obsessively with him, says “You’re my captive, my prisoner,” is stronger than he is and can pin his arms behind his back. She ties him to a tree, “surprisingly…adept, if not practiced, at the art of knot tying.” She prefers not to wear underwear because she likes “to catch the breezes.” She calls him a dolt, wears patent pumps and a black velvet dress or meets him naked in her room or in the woods, threatens to kill him.

Forces him, because what he remembers is that when they have finally given in to the sexual tension of their relationship in a motel room, is that, having lost her virginity, she is of course bleeding and blames him for having “done something awful to me.” He tries to explain to her it’s menstruation but she won’t hear of it, saying “Your words get in my head…Don’t try and humor me…You’re making excuses for yourself…You cut me with the knife…You did this to me…I’m in pain…” In the novel’s final pages, this is how he remembers the scene as a cacophony of images and shouts, some his own creation and some probably real.

Her hunting knife is in her hand. It’s out of its sheath. She’s flashing it at me, all the while holding her stomach…”Put it down,” I say. “It’s perfectly normal…” She cries, puts her hand over the spot, clutching herself, as if she can hold it in, push it back inside her…

The storm. Lightning crashes. The lights go off, then on again, punctuating our dialogue…I don’t know why, but I reach for the knife, take it away…

The first time it plunges in, there is resistence, but I’m angry, full of fire. I force it into her gut. The next one goes into her neck, a bigger splash, bright spray, the hiss of an artery. A hot, sticky fountain of blood douses everything. She makes a face and falls back on the bed, gurgling like a little girl…Again I plunge in. She looks surprised. Again and again. I can’t stop myself…

She’s in pieces, splattered around the room. Rivers of blood form small tidal pools. I don’t know which blood is which, from whence it came. The scent is meaty, the putrid stink of slaughter. I’m embarrassed by the vigor, the extent of my outburst. It is as if I’ve lost myself, broken away.

Have I made my point?


This question, seeming at first look to be addressed ironically to the dead Alice, and then to the parole board with whom he’s meeting, is finally revealed to be addressed to the reader. While the narrator is as untrustworthy as they come, he is also absolutely convinced that he has an audience. He does of course: “[If] you are anything at all, you know who I am—and find my disguise the silly childish senility of the long-confined, of the good mind gone sour [unconvincing]”. In the final paragraphs he echoes other unreliable narrators:

To you alone I’ve told the tale, do with it what you will. That’s all there is, there isn’t any more. I’m out of breath.

The deal is done…It is summer, the end of summer now…There is sky and trees, a high wire fence, a long road, and at the end of it you are there, waiting for me.

So glad to see you, I say. Missed you so much, thought about you every day.


Finally, the narrator is addressing not only “herr reader,” but Alice herself or the Alice of his imagination, the Alice who did not end up “decapitated, her head positioned between her legs, weapon…jammed in victim’s vagina…Accused apparently continued relations with victim after her death. Victim’s face and body covered in kisses. Accused dipped his lips in victim’s blood and then kissed deceased repeatedly.” This Alice will be more like the unnamed girl correspondent.

The girl correspondent, the nineteen year old who sends the narrator letters. She is important. As I said, she narrates alternating chapters of the novel, explaining her choice and subsequent seduction of twelve year old Matthew who is, unlike Alice, absolutely a flesh and blood boy. He smells. He is sweaty and hangs out with other nasty boys. He eats scabs. He talks back and calls what the girl reveals to him her “clip.” The letters, we are told, are not as full of information as the narrator would like, so he fills in what’s missing with fantasy.

After her successful seduction she is bored with Matthew, finds she’s bored with what her life has become, tries to kill herself, and is sent by her parents to Europe where in Paris she eventually leads a blind man and his dog up to her room. “When the girl brings the man to her bed, the dog grows excited and jumps up, joining them. ‘Couche,’ the man orders the hound. ‘Couche,’ he says, and the dog waits for his master on the floor.” She sends her final letter from the airport returning to the US. She tells him, “I’m not afraid of you anymore, I’m more afraid of myself.” This is the final lesson she’s learned from him.

Except that the girl really doesn’t learn anything from the narrator. There is no girl.

That there exist such girls, nineteen year olds compelled to work up a seduction of a twelve year old boy, coeds who write to famous child murderers to brag about both their crime and their having gotten away with it, this I don’t doubt. That the two might converge is part of the suspension of disbelief we give to fiction. And that at some level Homes intends for us to take the girl as a real character, I don’t doubt this either. There’s nothing in the text to suggest that Homes is setting us up for a fall.

My reasons for thinking the nineteen year old doesn’t exist except in the narrator’s imagination are these: she is just on the cusp between teenage and adulthood, and may even be the age the narrator was when he began molesting children (we know he molested many, many girls but he has only been charged with Alice’s rape and murder); the age of her victim is the same as Alice’s; Matthew is as mundane as Alice is idealized; the girl lives an upwardly mobile, upper middle class life, significantly different from the narrator’s own childhood growing up either traveling with his seductive mother (to whom he may have lost his own virginity) between bouts in sanitariums or staying with her mother; we know the narrator is unreliable, dealing with mental illness beyond pedophilia, and there is not a page where he doesn’t remind us of that; no one ever uses her name, even in his fantasies, just as no one uses the narrator’s name, even in his “reality.”

Finally, she gets away with it. What better fantasy is there for someone who says of himself he is “finally free” only upon being returned to his cell after being denied parole?

Posted by bobby sneakers at 1:52 PM